In the capital of Papua province, Jayapura, three West Papuans were killed by Indonesian occupation forces, and one Indonesian soldier was fatally stabbed in a successful act of revolutionary justice.

The violence was sparked by police, attacking West Papuan university students who recently returned to West Papua from cities in other parts of Indonesia, and had converged at Jayapura’s University of Cenderawasih for a solidarity action.

Around 2000 students have returned home early from study in mainly Javanese cities where racist attacks on Papuans last month prompted widespread protests in the Papuan provinces and also raised fears for the students’ safety.

318 people were arrested on September 23. Since the beginning of the West Papua uprising last month, at least 40 West Papuans in Jayapura alone have been named as suspects, including those charged with treason.

Meanwhile, in the Highlands city of Wamena, police murdered 16 West Papuans after high school students took to the streets in protest against racism.

Revolutionaries responded by setting up flaming barricades and torching several buildings, including a government building, shops, and the airport, as police and military were unable to contain the growing insurrection.

Tensions were already high in both Wamena and Jayapura, where large mobilisations took place in August as part of a growing uprising against racism and Indonesia’s colonial occupation of West Papua.

The protests grew into large-scale insurrection in various Papuan towns, as barricades were set up, colonial buildings torched, and prisoners escaped to freedom. The brutal Indonesian colonial regime has arrested dozens of West Papuans and shut down the internet throughout the colonized territory.

At least 35,000 West Papuans have been forced from their homes as colonial forces have attempted to suppress the revolutionary movement.

An additional 6000 Indonesian police and military personnel were deployed to West Papua by early September.

West Papuan guerrillas have been fighting against the Indonesian police and military in West Papua for decades in a popular insurgent struggle to free West Papua from colonization. As the colonial regime continues to commit atrocities and the insurrection grows, intnternational revolutionaries should act in solidarity with the West Papuan people.

More than 80 university students in Indonesia‘s capital were being treated in hospital on Wednesday, a day after violent clashes with police during protests triggered by a new law that critics say cripples the country’s anti-corruption agency.

Officials at Jakarta’s Pertamina Hospital said that 88 students were treated for injuries that included broken bones, head wounds and respiratory problems due to tear gas.

The protest outside Parliament on Tuesday saw police fire tear gas and water cannons to disperse thousands of rock-throwing students. The protest was dispersed just before midnight and by Wednesday morning, city officers were cleaning up rocks, plastic bottles, banners and other debris from the protest.

Students held similar protests in cities around the country on Tuesday, including Bandung, Yogyakarta, Malang, Palembang and Medan.

Several student groups vowed to return to the streets on Wednesday and continue the demonstrations until the law is revoked.

Critics say the legislation, passed in Parliament last week, reduces the authority of the Corruption Eradication Commission, a key body in fighting endemic graft in the country. 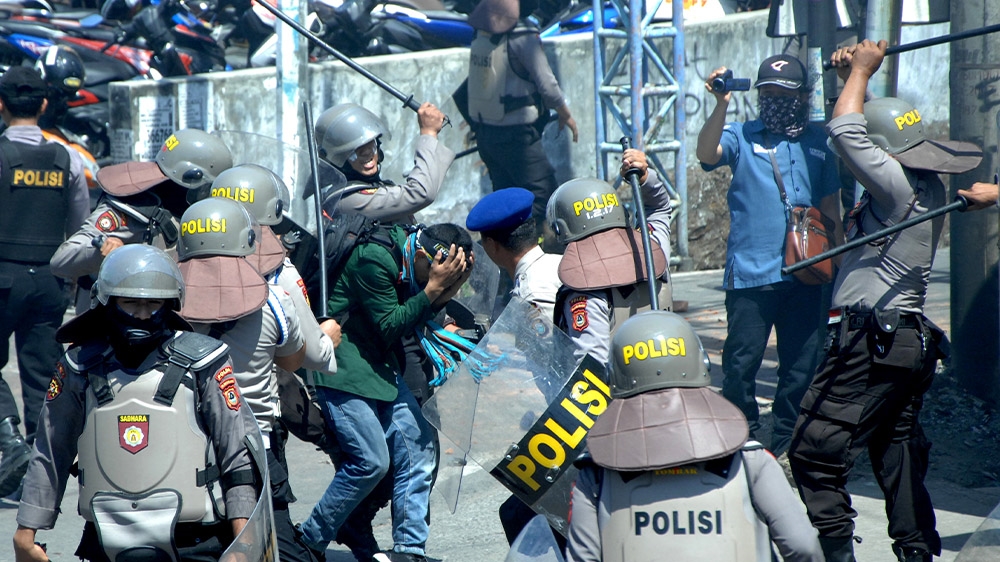 The fallout from the new law has threatened the credibility of President Joko Widodo, who recently won a second term in office after campaigning for clean governance. His inauguration is scheduled for next month.

Corruption is endemic in Indonesia and the anti-graft commission, one of the most effective institutions in the country of nearly 270 million people, has been attacked frequently by lawmakers who want to reduce its powers.

Hundreds of officials from various branches of government have been arrested since the agency, which is independent, was established in 2002 as part of the reform demands that followed the overthrow of former strongman leader, Suharto.

Activists say the changes weaken one of Indonesia’s most credible public institutions in a country where the police and Parliament are perceived as being widely corrupt.

The revisions also reduce its independence, with investigators becoming civil servants who need to be seconded from state bodies, including the police.

The new protests are not associated with a particular party or group, and instead are led by students, who have often been a force for political change. It was their demonstrations in 1998 that helped lead to Suharto’s downfall.

Those demonstrating this week are demanding that Widodo issue a government regulation replacing the new law.

The protesters also urged Parliament to delay votes on a new criminal code that would criminalise or increase penalties on a variety of sexual activities, as well as other bills on mining, land and labour. Opponents say the proposed criminal code threatens democracy and discriminates against minorities.

On Tuesday, Widodo met legislators, whose terms finish at the end of this month, to urge them to delay votes on the bills after considering the level of public concern. They then delayed their votes on the proposed laws in their last plenary session.