The Indigenous Binnizá community of Puente Madera mobilize in defense of their common lands against the construction of an industrial park, one of the ten industrial parks being proposed as part of the Interoceanic Corridor Megaproject in the Isthmus of Tehuantepec.

Jun 27, 22 from.. Its Going Down Filed under: Indigenous, Land, Solidarity, Southern Mexico via thefreeonline

To the Indigenous Peoples, Organizations, and Collectives of the Isthmus of Tehuantepec, Oaxaca, Mexico, and the World

Today, once again, inhabitants of Puente Madera are mobilizing. It has been a year since members of our community found out that the installation of an industrial park in our common-use hill, El Pitayal, was being considered.

It has been a year since the first assembly of comuneros was convoked by Antonio Morales Toledo who in that moment was the municipal president of San Blas Atempa. Today he is the right-hand man of Salomón Jara Cruz, the governor-elect of Oaxaca who recently won in a state-wide election marked by widespread abstentionism.

It has been one year since the government who tried to sell us the promise of not repeating the masters of the past, endorsed the dispossession of our common-use lands using a supposed “previous, free, and informed consultation.”

This consultation violated the principles of good faith, and was far from fulfilling the “prior, informed, and culturally adequate” requirements demanded by the law.

Rather it was characterized by the falsification of signatures of more then 80% of the comuneros, and the use of signatures from two comuneros who were already deceased.

It was also carried out according to the temporalities of the market and not of the community. In only four hours during two days they processed all the information and endorsed the industrialization of our common lands.

Today, one year since the dispossession of our lands began, along with the violations of our rights as Indigenous peoples, as the Binnizá community of Puente Madera, we reiterate that we will remain firm in our resistance.

These are tactics used by the municipality to apply pressure on us. It is a form of intimidation and criminalization being used against our community.

These tactics are being used against us due to our resounding rejection of the industrialization of our lands, which is a consequence brought by the Interoceanic Corridor Megaproject of the Isthmus of Tehuantepec. 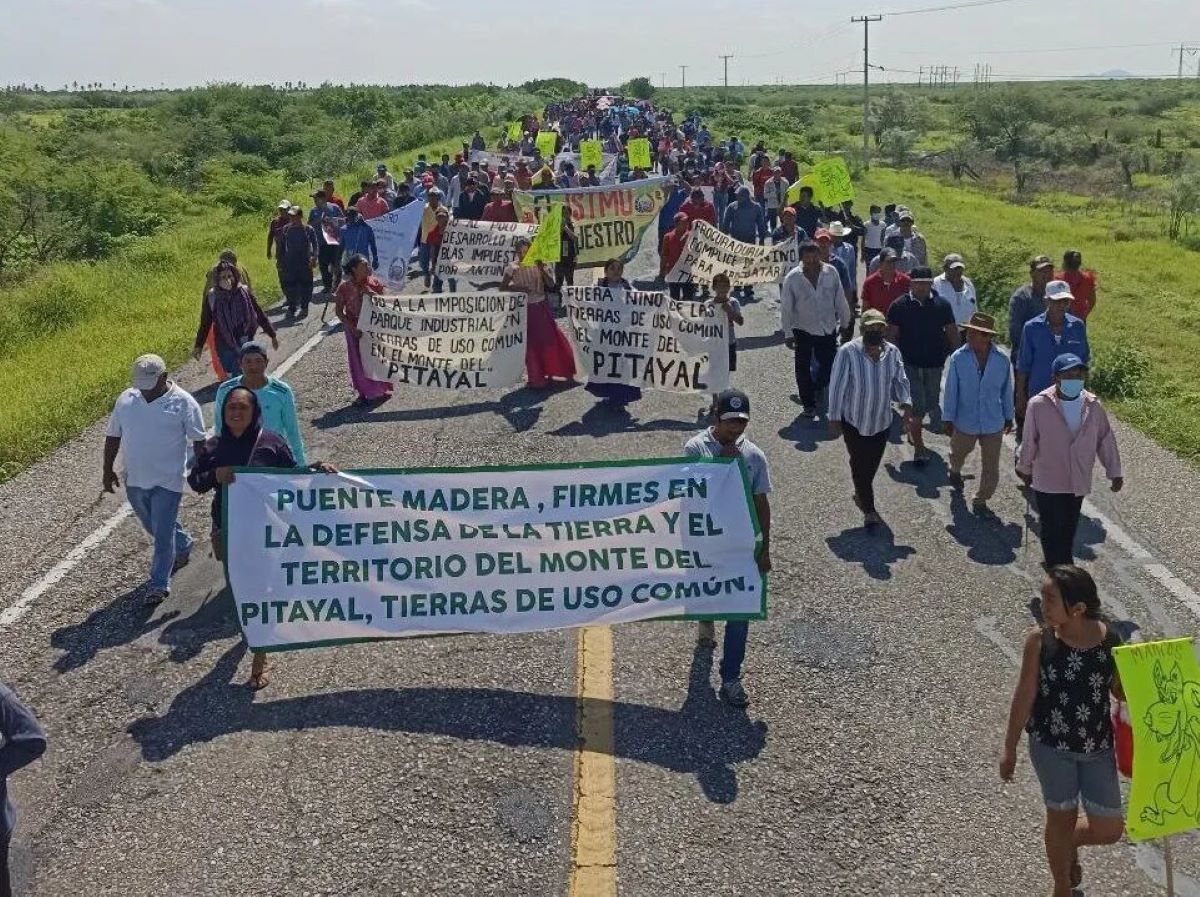 The current government has offered us this industrialization under the disguise of well-being and development.

Yet, this industrialization will only bring us water scarcity and contamination, land grabbing, and the contamination of our soil and air. In exchange they offer us precarious working conditions and labor exploitation.

Furthermore, the Interoceanic Corridor is expected to serve as a containment barrier for the Central American migrant population. The project offers us agroindustry so that we forget the zapolote chico, our native corn, the base for totopos, our traditional tostadas from the Isthmus.

They offer us metallurgy and textile industries so we abandon the countryside and our land. In just a few years this industrialization will lead us to critical levels of water scarcity like that of which is being experienced now in Monterey.

In our hill of El Pitayal, the seek to install one of the ten industrial parks that make up part of the Interoceanic Corridor. This megaproject has offered our lands, springs, wind, forests, jungles, oceans, hills, and all that they can commercialize to private capital of the United States and Asia.

They have also announced that our region will be the new border with Central American, and it will be surveilled and guarded by the United States military. The same military that will provide security for the businessmen who arrive to industrialize our territory.

We know that the criminalization, repression, and harassment against those of us who defend life and oppose this megaproject will begin to intensify in the coming months.

We call on the people of this region of the Isthmus of Tehuantepec to raise your voices against the industrialization and surrender of our territories brought about by this megaproject.

The Community Assembly of Puente Madera calls on the individuals and collectives, Indigenous, social, student, teacher’s, women’s, and dissident organizations of Oaxaca, Mexico, and the world, to show solidarity with our struggle in defense of territory, against the industrialization brought by the Interoceanic Corridor Megaproject.

We call on everyone to carry out dislocated actions, according to your own modes, forms, locations, and times, to demonstrate that solidarity is not just a written word.

We will not allow machines to enter El Pitayal.

Nor will we allow any work to be done that threatens our common lands.

No to the Industrial Park of the Interoceanic Corridor.

We demand the revision and cancellation of possession titles of common use lands.

If they attack one of us, they attack us all. If there is repression, there will be mobilization.