Anarchists In the News

Anarchists clashed with cops during the march against police brutality. This was the 22nd installment of the march — and along with MayDay, it’s consistently one of the most militant demonstrations that takes place in the Canadian city each year.

People attacked the cops with flag poles and fire extinguishers filled with paint. Corporate stores and banks had their windows smashed, but the police managed to protect the studios of TVA – a right-wing TV network that published a fake news story that stoked anti-Muslim sentiments in Quebec City. 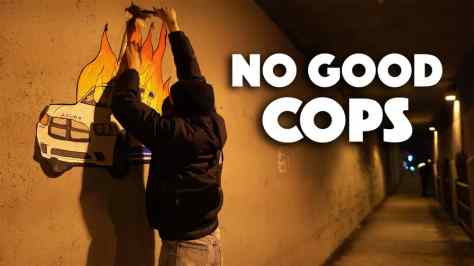 The police violently charged at the crowd, seriously injuring one person and arresting three. Three cops were also injured.

“Cops Protect Fascists” Report-back
Frontlines in the Fight Against Islamophobia
March 15 in Montreal: Police Attacked, Kettle Broken
Anti-gentrification Vandalism in Saint-Henri
Revolt in the Youth Center of Val-Du-Lac
Enbridge Line 3: The Feeblest Head of the Hydra
Montreal Antifa Prevails: Would You Like A Beating With Your Happy Meal?
4:20 – Against legalization and Criminalization Alike
Police Protect Far-Right Demo from Antifascists
Business Invasion: A Tactic to Fight Gentrification?
May Day in Montreal: Some Critical Reflections
Hey There Yuppies!
You’re Also Staying In “Montreal” This Summer?
A Recipe for Nocturnal Direct Actions!
Street Demonstration Tips
June 11th: Communication As a Weapon
How to Safely Submit Communiqués

END_OF_DOCUMENT_TOKEN_TO_BE_REPLACED

Montreal police arrested 447 people last night during a May Day demonstration in Montreal organized by a group called the Anti-Capitalist Convergence, or CLAC.

Those arrested at the demonstration that coincided with International Workers’ Day were released over the course of the night and handed a $637 fine for unlawful assembly.

The noisy, colourful rally Wednesday was almost festive when it began early on the unseasonably warm evening.

However, police declared the gathering illegal shortly after it started under the controversial Montreal public order bylaw P-6. The bylaw makes it illegal to participate in an assembly with a face obscured by a scarf, hood or mask, and requires protesters to disclose to police in advance the location and itinerary of their demonstration.

Police said they issued a dispersal order, and also confirmed criminal acts, which consisted mainly of wielding sticks and throwing billiard balls at officers, were performed.

“It was getting dangerous for peace and safety and the public order,” said police Sgt. Jean-Bruno Latour.

Dozens of demonstrators tried to make their way to the march’s destination, a private club known by its street number, 357c.

Witnesses at Quebec’s inquiry into corruption in the construction industry have referred to the club in testimony as a meeting place for entrepreneurs, high-level bureaucrats and politicians to discuss business.

However, the demonstrators never reached the club.

Hundreds of police encircled the protesters at the intersection of de la Commune Street and St-Sulpice Street. They herded — and in some cases, physically carried— those detained into awaiting buses.

The CLAC denounced the police intervention, saying they used disproportionate force against protesters.

Latour could not say if anyone would face criminal charges.

5-hour blockade of railways between Toronto, Ottawa and Montreal

First Nations demonstrators stopped passenger railway traffic lines between Toronto, Ottawa and Montreal today, while others stalled major highways and rail lines in parts of Manitoba, Alberta, New Brunswick and Ontario as part of the Idle No More Movement’s national day of action.

Activities including rallies, blockades and prayer circles were staged across the country Wednesday as part of the grassroots movement calling for more attention to changes that were contained in Bill C-45, the Conservative government’s controversial omnibus budget bill that directly affected First Nations communities. END_OF_DOCUMENT_TOKEN_TO_BE_REPLACED