This is the (almost) weekly newsletter that will inform you about the activities of 15M movement in Barcelona, Catalonia and occasionally the main events in Spain.

1. “Let’s get rid of them, together we can” 50 cities against the financial dictatorship
2. A week of non-stop protests in Barcelona
3. Public health care system alternative: 2 cooperatives in Barcelona

1. “LET’S GET RID OF THEM, TOGETHER WE CAN”: 50 CITIES AGAINST THE FINANCIAL DICTATORSHIP

Thousands of people took the streets on February 23rd. This is a significant date in Spain, as in 1981 an attempt of military coup d’état took place on this day, and the shocking images of 200 armed officers of the Guardia Civil taking over the Congress stayed in the Spanish collective memory forever attached to 23-F . The demonstrators, by choosing this date, wanted to point out that we are living under the dictationship of the financial markets, a constant attack to people’s rights and to democracy which are translated into budget cuts on public services, working laws reforms which destroy even more jobs, cuts on the rights for migrants, repression of protesters on the streets and censorship of any critical views. It also meant that this time it’s the people who are taking over the country.

The call came from different groups in struggle with the idea of joining forces and standing united for their rights.The result was that more than 50 cities in Spain mobilized in what was named the “marea ciudadana” (Citizen’s Tide):The name was chosen because in many Spanish cities the sectorial struggles are named as a colour tide, so “marea verde” (green tide) is for education, “marea blanca” (white tide) for Health Care, etc. In Madrid the demo ended with 42 arrests.

Barcelona didn’t take the same name, as the sectorial fights are not called “tides”. Under the slogan “Fem-los fora, juntes podem” (catalan for “Let’s get rid of them, together we can”), more than 40 thousand people demonstrated in its streets. The demonstration was organized in four main columns starting from different points in Barcelona and carrying out their own actions and manifestos on their way:

Neighbourhoods created small columns winding through the city and joining the main ones to march towards Plaça Catalunya and there start a route altogether ’till Sant Jaume, where the Generalitat and the City Hall are located. There, a joint manifesto was read while people were still trying to enter the crowded square.
The group that organized this demonstration wants to keep on meeting and calling for joint actions in the near future. Because together we can get rid of them.

2. A WEEK OF NON-STOP PROTESTS IN BARCELONA

Telefónica
As theFebruary 23rd demo was starting, the Marcos’ Readmission Platform,with active and pre-retired Telefonica  workers, started another hunger strike to demand the readmission of Marcos, fired for being sick (See NL#34, 2 ).
It was the starting point of a week of mobilizations to show the rest of the phone companies attending the 2013 Mobile World Congress (MWC), that Movistar (Telefónica’s mobile company, one of the biggest sponsors of the event) not only fires people for being sick but also has as technical counselors people under trial for corruption, such as Rodrigo Rato (former president of Bankia an the IMF – (See NL#17, 1 , and NL#24, 1 ) and Iñaki Urdangarin (member of the royal family indicted in the Noós Foundation scandal).
To highlight Telefónica’s doings, on February 25th the mobile company’s workers went on strike and visited the MWC to do a Flashmob . There was also a performance of a trial to Capitalism. During the whole week several meetings and assemblies took place, and finally the week of mobilization was considered a success. Telefónica even tried to cheat on the social networks by creating fake profiles to defend itself.
The hunger strike ended with the MWC, but the fight continues.

Universities
The PUDUP (Unified Platform for the Defense of the Public University, See NL#29,1 ) called a strike on February 28th. Several actions warmed the atmosphere up the days before the strike: lectures on the streets, occupations of campus all along Catalunya, assemblies and information points.
The call was a success: not only students but also teachers, administration and services staff emptied the buildings to take the streets. A spontaneous demo took place along the center of Barcelona which ended with clashes with the police, were several students were arrested.
The PUDUP’s main demands were ending budget cuts, derogation of the law of education, stopping the strategy of mercantilazing universities and paying back the extra charges by the huge fees increase this year.

March against precariety and for basic income
Meanwhile on February 28th 300 people, called by the Coordinadora de traballadors/es en atur de Catalunya (Coordinator of Assemblies of Unemployed People in Catalunya), started a march from a town nearby Barcelona, Sant Vicenç dels Horts, at 9 in the morning, and made a journey through several other towns -Sant Feliu del Llobregat, Cornellà and Hospitalet- gathering more and more people despite the heavy rain and strong wind. The protest reached the meeting point in Barcelona around 5 pm. In Plaça Espanya they came together with Telefónica and Movistar workers and the elder activists iaioflautas (see NL #37, 2 ) and carried on in a demo towards the Parliament. When they got to Barcelona’s center the strikers from universities also joined in a solid march to support the unemployed workers as they handed in their vindications a the Catalan parliament .

Montserrat monastery’s abbot has unexpected visitors
This week was also chosen for a surprise action by the famous senior activists, the iaioflautas (see NL #37, 2 ). As usual in their “mischiefs”, as they call their actions, the setup was secret and few people knew what the iaios were up to. What seemed like the regular busload of pensioners coming to visit Catalunya’s most emblematic monastery soon proved to be something else: the grannies and grandpas put their yellow vests on, grabbed their walking sticks and set off to ask the abbot to support the 99%, stand against the doings of the 1%, take party against the cuts, show some compassion with people suffering the recession and, specificaly, to show support towards the Telefonica workers on strike, among other claims.
The elder activists in Madrid also managed to speak with the Archbishop of Madrid, the infamous cardinal Rouco Varela , known for his right-wing and extremely conservative ideas. 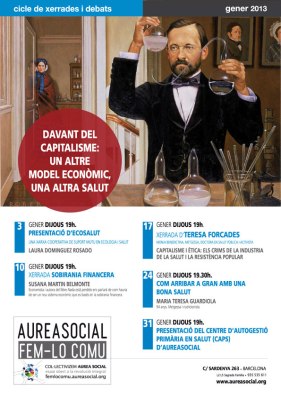 The Spanish public health care system is in crisis: progressive budget cuts and a long-lasting plot of corruption are serioulsy putting it in danger. The private health system is taking advantage and offers its services by advertising through media, but also by having politicians an public personalities say that private health is the only safe way out.

Many collectives and platforms of health workers, patients and citizens in general are fighting every single day for the basic democratic right of a quality public health for everyone. At the same time many other people are working on organising and building alternatives.

COS has been created by professionals from many branches within the health care field . They offer medical care by an integrative and cooperative health model that considers the coexistence of different medicines and therapies and different ways to understand health, promoting also the ability to self-manage the patients’ own health. COS works to recuperate the “attention to the person”, by its attention to cronical and acute pacients and through the workshops it offers on “birth preparation”, “child massage” and “reflexology”. This health care cooperative offers also accompaniment to therapeutic processes that happen outside the COS, if necessary.

Indeed the cooperative is formed by the professionals and the users alike, building toghether a parteicipative and comunitary project in order to find solutions to care necesities at short, medium and long term. Therefore, members of the cooperative can be worker-members or consumer-members. They will receive information aboutCOS’ activity, they may participate in the COS’ general assemblies and be elected as representatives, and they will obtain medical attention at a cheaper price than non-members.

In order to build a network of social and supportive economy, COS cooperates with other cooperatives, being part of the XES (Network of Supportive Economy See NL#31, 4) and of the Federació de Cooperatives de Treball de Catalunya (Federation of Work Cooperatives of Catalunya )

The SSPC is a project born of the CIC (Catalan Integral Cooperative). In their website they say that the idea they promote is linked with  emancipation from capitalism in order to get out of the systemic dependence and managing to become self-sufficient in all aspects of life. What does this mean exactly?

They think that the health care systems corporative policies have created a health market where the human being has become a patient/client that demands on sanitary intervention even in processes that are following their natural course: on one hand the current recession is also the crisis of the biomedical model, on the other hand health is conceived as a key sector within the capitalist system that generates and chronifies diseases as part of its strategy, it being an extremely significant economic factor.

The SSPC describes – schematically –  these main features of the new health system proposed :

It is clear that the SSPC model is something different from a defense of the existing system: it is a totally different point of view regarding the whole question of ilness and care. According to this model the role of “health facilitator” has been introducted together with a new concept of health nodes. The first center is located in Aurea Social where so-called alternitve medicine cares are available, self-financed by monthly contributions of those who can pay, according to their income, while those who cannot pay help with other kinds of support: work, exchange of knowledge or several other possibilities.