The health situation of parliamentarian Leyla Guven deteriorated and she was transferred to the hospital as she is continuing hunger strike on the 98th day. Leyla Guven refused any medical intervention to treat her.

The co-chair of the Democratic Society Congress and Parliamentarian Leyla Guven continues her hunger strike for the 98th day in a row.  Due to the deterioration of her health status, Leyla Guven was transferred to the hospital, and information was reported that Leyla Guven refused treatment.   ANHA

Letters from Leyla Güven to the women of the world

Even though our geographies are divided by thousands of kilometers, I’m glad you heard my voice. Even though we are from very different corners of the world, as women, we always feel. As Hypatia says, “none of us resemble each other, but the things that unite us are greater than those that separate us.” We are all sisters. What unites us the most is our struggle for freedom, our resistance against all kinds of fascism, against the dictatorship and the patriarchal mentality.

Women who resist and fight always become symbols: Clara Zetkin, Rosa Luxemburg, the Mirabal sisters, Sakine Cansiz, Leyla Qasim and many other women become symbols through their struggle. As women, we are half of the world’s population. However, we are all oppressed. When we begin to fight for our rights, we are labeled as terrorists.

All the women of the world must give fascism enough, enough to the dictatorship!

The murder of women through domestic violence, female genital mutilation, child marriages, women sentenced to death in Iranian prisons – Zenenep Celalyan is one of them – Kurdish women, who were banned from mother tongue, the Arabs who fled the war. All point to femicide. As women who are prepared to die, we can stop this femicide through the connection of our struggles. While we are determined to fight.

I am a Kurdish woman. My awareness of the injustices committed against women developed thanks to Mr. Abdullah Öcalan. It is through the importance of the struggle that Mr. Öcalan placed on the freedom and camaraderie of women, that millions of women have developed a strong willpower.

Women have experienced an awakening. And I am one of these women. I learned to be at peace with my gender, to fight against the patriarchal mentality, and I learned to be a feminist. When I heard from Mr. Öcalan that a society will only be free when women are free, for many years I have carried out a struggle for the freedom of women and I will continue to do so.

Mr. Öcalan, to whom I owe my own awakening, has been locked in an isolated cell for the past 20 years. In order to demand the removal of Mr. Öcalan’s isolation, something that millions of Kurds see as their political will, I have started a hunger strike. Mr. Öcalan is an important actor in the efforts to create peace in the Middle East and in the world. As a prisoner, going against national and international laws, you are denied all your rights and freedoms.

To request recognition of these rights, we, as Kurdish politicians of the People’s Democratic Party (HDP) and the Democratic Society Council (DTK), are calling for an end to their isolation. We say that this is a crime against human rights. However, to silence us, the fascism of the AKP (Justice and Development Party) and MHP (Nationalist Movement Party) imprisoned us.

They specifically addressed women. More than half of the imprisoned parliamentarians are women. The same goes for the mayors of cities, who were taken to prison. The mentality that does not accept the quota of women in politics has implemented a policy of 60-70% of women in prison.

I’ve been in prison for about a year. A prisoner has no more than her own body. So, I started this hunger strike. Now, together with me, in the prisons of the whole country we are already 230 friends, political prisoners, who have started an indefinite and irreversible hunger strike. Hannah Arendt has a beautiful quote: “Freedom means action. Because freedom can only be achieved through action.

The action drives the movement that resonates among the people. ” The demands of my action are legitimate and of law. If our demands are not met, hundreds of people can lose their lives. If this happens in the 21st century, it will not only be the shame for Turkey, but that of all mankind.

So that the world does not face such shame, the women of the world must do what they can. And without losing more time. We will continue resisting. Resistance will help us win. Our belief in this is infinite. In this sense, I call them all to resist.

Long live the solidarity of the peoples and of women.

DIYARBAKIR, Turkey — Despite being released from jail, pro-Kurdish deputy Leyla Guven has vowed to maintain a hunger strike she launched over two months ago until Turkish authorities improve prison conditions for Kurdish militant leader Abdullah Ocalan.

Guven was freed under judicial control on Friday after serving a one-year term for labelling the Turkish military operation against a Syrian Kurdish militia an “invasion”.

She launched a hunger strike on November 8 while in jail to protest Ocalan’s prison conditions.

“I uttered a scream in the dark… I started by daring to die for this cause”, she said, since her demand to improve Ocalan’s detention conditions may never be fulfilled.

The 55-year-old, an MP from the pro-Kurdish Peoples’ Democratic Party (HDP), was speaking to AFP on Wednesday in her home in the Kurdish-majority city of Diyarbakir.

Guven, who wears a surgical mask over her mouth to reduce the risk of infection in her weakened state, said she was determined to keep up the hunger strike despite the risks to her health.

“This action has one specific purpose: as a Kurdish politician, I’ve kept saying that (Ocalan’s) isolation is inhumane”.

Ocalan, one of the founders of the outlawed Kurdistan Workers’ Party (PKK), has been serving a life sentence on a prison island off Istanbul since his 1999 capture.

The PKK — listed as a terror group by Ankara and its Western allies — has waged a decades-old insurgency against the Turkish state seeking independence, and more recently autonomy, for Turkey’s Kurdish minority.

Some 250 prisoners all over Turkey have launched hunger strikes in support of Guven, who is trying to pressure the Turkish government to allow Ocalan to hold regular meetings with his family members and lawyers.

While Guven was in jail in Diyarbakir, the government this month allowed the PKK leader to meet with his brother Mehmet. It was the first visit in over two years.

“I don’t want anything that is not in the law…” Ocalan “should benefit from what rights he has under the laws of Turkey,” Guven said.

“I have one single goal: that the isolation will be lifted.”

Guven shared some details of the meeting after Mehmet visited her early this week.

Ocalan issued a message through his brother that “nobody should die for me, may it be through setting themselves on fire or hunger strikes. That would aggravate my burden”, according to Guven.

Guven said it was her personal decision to go on hunger strike.

At her home, Guven is accompanied by a voluntary health care professional. Her blood pressure is constantly checked.

Visitors wear shoe covers at home and masks over their mouths. Her daughter Sabiha Temizkan is constantly by her mother’s side.

Like other hunger strikers in Turkey she is taking sugared or salted water, and she said her health is good given the circumstances.

But she has refused to undergo any stringent medical checks.

“A delegation came from the Diyarbakir Doctors’ Chamber to examine me. I’ve already told them I would not accept treatment,” she said.

“I am suffering from a serious weakness. I had difficulty after my release from prison but I didn’t accept treatment.”

She has also had no contact with any government officials so far, she said.

The Turkish government accuses the HDP of being a political front for the PKK. Several of the party’s MPs are in jail, including its former co-chairs Selahattin Demirtas and Figen Yuksekdag.

Guven lashed out at the “fascist” ideology pursued by the ruling Justice and Development Party (AKP) and its right-wing ally, the Nationalist Movement Party (MHP).

And she sounded optimistic that her voice has been heard.

“Everyone sees the isolation is inhumane… What do we want? What does an HDP MP want? She wants democracy, human rights, and equal justice,” she said. 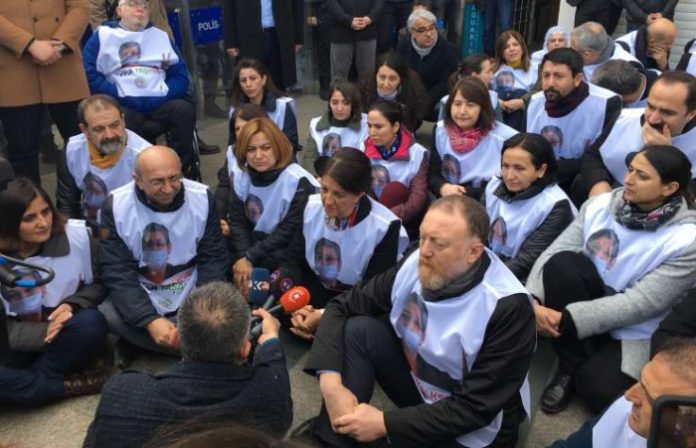