Protesters dressed as robots demand a basic income for everyone during a demonstration at the Bahnhofstrasse in Zurich,

A “robot rally” has taken place in Zurich, with more than 100 activists wearing cardboard costumes in the streets as part of a major call for the introduction of Unconditional Basic Income (UBI) in Switzerland.

The Swiss are set to go to the polls on June 5 in a referendum on a guaranteed income for everyone. The sum proposed stands at 2,500 Swiss Francs ($2,500). The Swiss people will be voting on a new article in the country’s constitution which stipulates that the federal government would have to implement the UBI with an “amount high enough for people to live off in dignity.”

According to the organizers of the first rally of its kind in the world, activists from the Unconditioned Basic Income (BGE) movement, claim that the main idea of an UBI is to secure the basic needs of human life unconditionally. Calling themselves “the robots”, they argue that humans should be free and not struggle for basic income. 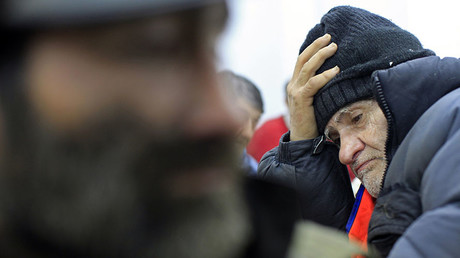 “We want to work for the humans to relieve them from the struggle for income. We are really good in working. But we do not want to take away people’s jobs and thereby bring them into existential difficulties,”a BGE declaration adopted earlier this year reads.

Fearing that soon the dangers of robotization in the workforce will cost humans their jobs, the “robots” decided to play an active role in defending the idea to introduce “an Unconditional Basic Income for all humans.”

“I beg of you, dear human friends, go out and fight for the unconditioned basic income. Convince your friends that we robots are not enemies but friends. Because it is you who created us,” one robot said at the rally.

Despite strong robotic advocacy, according to Friday’s poll by Swiss Broadcasting Corporation, the push for a basic income safety net will be rejected in June. Currently only 24 percent support the idea, while 72 percent oppose it.

“Despite a most interesting campaign, the promoters don’t stand a chance with their ideas, even if it is the first nationwide vote on such an issue,” Claude Longchamp, head of the GfS Bern institute, told Swiss Info…. reblogged from  https://www.rt.com/ with thanks

Anationalism grew out of the radical movements for Internationalism and cosmopolitanism  in the early twentieth century and was a reaction of anarchism against escalating war hysteria. Today few remember this movement.

The term “anationalism” was coined in the early twentieth century by Eugène Lanti, an anarchist activist (1879-1947), to designate a new political movement that sought to eliminate the nation not only as a variable in the international workers struggle, but even more as the basic unit of all socio-political organization.

Nor does it appear in the main theoretical writings on nationalism (Ernst Gellner, Anthony D. Smith, Ellie Kedourie, Michael Billig or Eric Hobsbawm), nor even in studies that advocate postnationalism (Jürgen Habermas, Pascale Casanova, Edward Said, Bernat Castany) is  Eugène Lanti or anationalism mentioned once.

The Little Red Box Of Protest Songs is a truly outstanding release. A three CD box-set full of the finest protest folk music from the USA of the early 20th century. Celebrating the 100th anniversary of the publication of the first American protest song book, ‘The Little Red Song Book’ this collection traces the roots of protest song in the US from the first half of the last century up to the Fifties illustrating how the stage was set for the folk protest giants of the Sixties such as Bob Dylan and Phil Ochs. Featuring classic performances by Pete Seeger, Woody Guthrie, Josh White, Leadbelly, The Almanac Singers, The Weavers and many many more.

The usual suspects – Woody, Pete, Leadbelly, Josh White – are all present and politically correct (or not, depending on your ideological viewpoint!). The 60 tracks are mostly circa the Second World War – more than 60 years old, but all worth preserving and hearing. The best songs here – Leadbelly’s The Bourgeois Blues, Josh White’s Jim Crow Train, Brownie McGhee’s Black, Brown and White – are superb, but even the ones with less artistic value are historically significant.