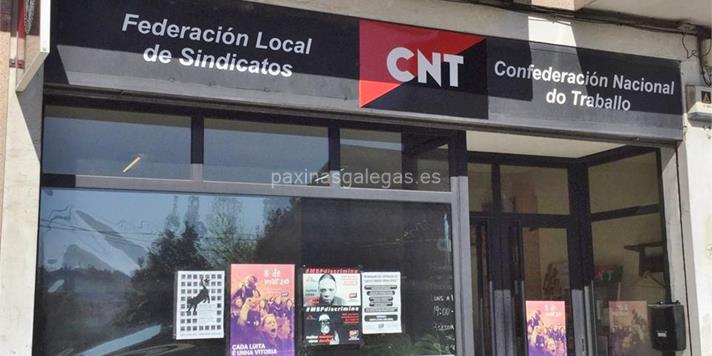 He got just 10 months, though even the Defence asked for 2 years,   for beating and stabbing her. But they acquitted him for rape because she ‘didn’t struggle enough’. This despite the fact that the prosecution requested ten years in prison and had a previous conviction for raping another woman. 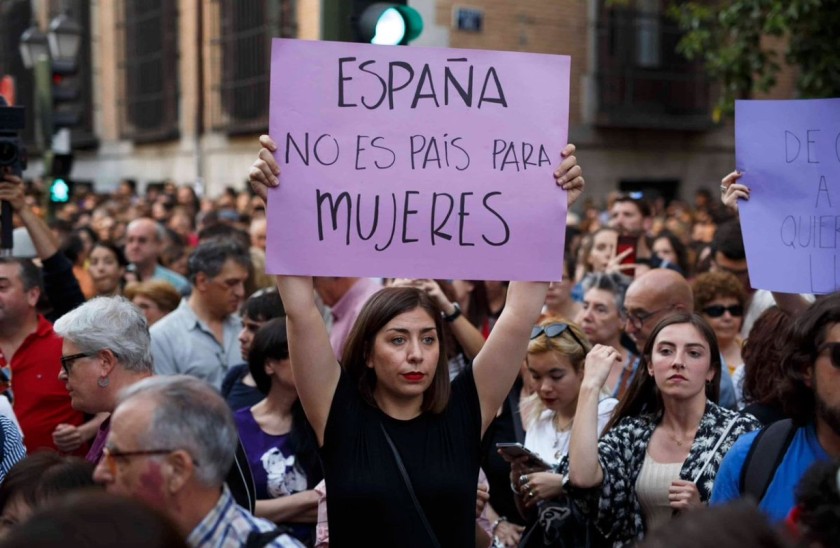 It’s the same political court and it’s another direct attack on the uprisen Iberian feminist movement in the wake of the Womens General work and home Strike and ongoing mass actions. END_OF_DOCUMENT_TOKEN_TO_BE_REPLACED

The Women’s Revolution in Rojava: Defeating Fascism by Constructing an Alternative Society

This piece is a book chapter in “A Small Key Can Open A Large Door: The Rojava Revolution” by Strangers in a Tangled Wilderness (Ed.), March 2015 (Combustion Books). 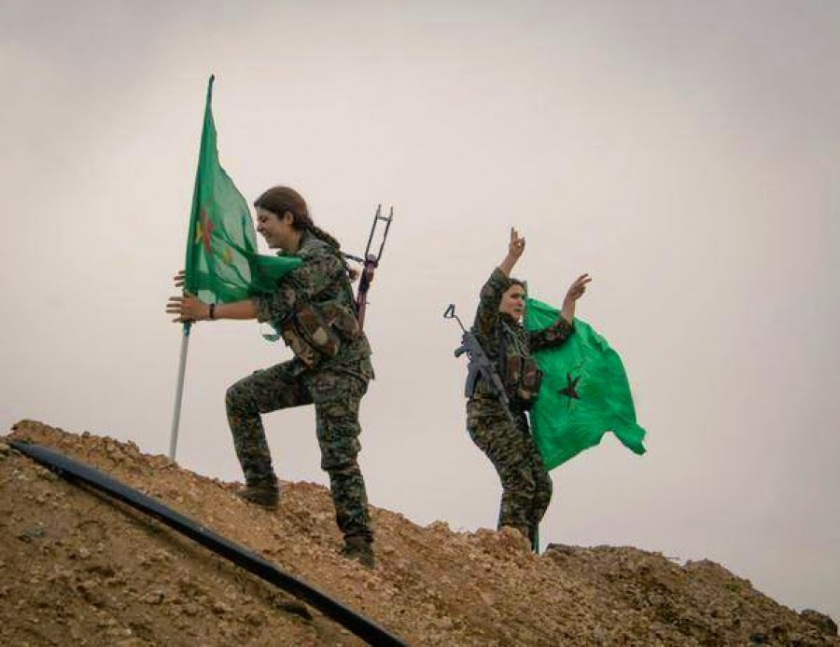 The resistance against the Islamic State in Kobanê has woken the world to the cause of Kurdish women. Typical of the media’s myopia, instead of considering the radical implications of women taking up arms in a patriarchal society – especially against a group that systematically rapes and sells women as sex-slaves – even fashion magazines appropriate the struggle of Kurdish women for their own sensationalist purposes today. END_OF_DOCUMENT_TOKEN_TO_BE_REPLACED

How true is this? I find it ridiculous that we’re still fighting the same issues.

1. Reproductive RIGHTS. Abortion and contraception aren’t going anywhere. Get the fuck over it. Random thought, why are condoms never a part of the debate? It’s always about contraception women use.

2. Rape is rape. No means no. The rapist is the ONLY person to blame. And no, the body cannot shut down rape babies.

3. Same-sex couples will be able to get married all over the US. There’s no stopping it. GET USED TO IT!

5. Fucking pass VAWA already. ALL women deserve to be protected. Stop being assholes. Yeah, I’m looking at you Cantor.

Thanks for reading my rant! 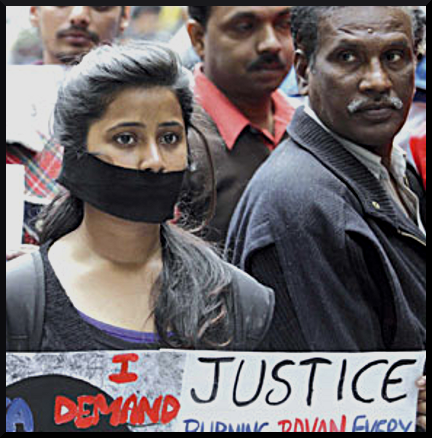 In December 2012, the  Delhi Gang Rape public uprising sent a furious message to the the government of  India! That message was: ” We are not going to tolerate government apathy and corruption in face of  the intolerable violence on girls and women in India.”

There’s an increase of 873% in India’s rape crime rate. Moreover, in 20 years, 20% of women will have been exterminated from India subject to all forms of gender specific violence. [Also browse our newspaper log]

The government’s first response was — stony silence!  It pretended it didn’t hear!

As the uprising gathered momentum and all of India came on board, the government decided it to use brutal force to clamp down on the protestors. END_OF_DOCUMENT_TOKEN_TO_BE_REPLACED

My placard for the day END_OF_DOCUMENT_TOKEN_TO_BE_REPLACED

“It took the police two and a half years to arrest/sentence the man who raped me,who stole my virginity, In that time he managed to ruin 6 other girls lives. He spend just 7 months in prison. But that isnt the worst part the fact that people posted on his Facebook telling everyone that he was innocent and that the ‘victims’ were making it up, still not being the worst part The worst part is that i still see him walking around in the streets where i use to END_OF_DOCUMENT_TOKEN_TO_BE_REPLACED

Abortion: It’s every Womans Right to Choose  By Patricia McCarthy.

Anarchists believe that every woman has the right to choose an abortion when faced with a crisis pregnancy irrespective of the reasons for the abortion.

Women worldwide have always sought to control their fertility through abortion no matter how difficult it is for them to get access to abortion and they probably always will.

This is because it is essential for women to be able to control their own fertility and not to be reduced to the level of their biological function as child-bearers only if they are to achieve true equality and liberation. END_OF_DOCUMENT_TOKEN_TO_BE_REPLACED

Rosemary Gonzalez was murdered in 2009, the victim of a war that ended in 1996. One day, 17-year-old Rosemary said good-bye to her mother Betty, walked out of their small house on the outskirts of Guatemala City and was never seen alive again.

Rosemary and Betty lived together in the poor neighborhood of Barcenas, under the constant shadow of violence. Across Guatemala, nearly 5,000 women have been killed in the past decade, attacked for the simple fact of being women. The women of Barcenas know well this fear—they live at the epicenter of this crisis.

In Guatemala, generations of women have faced murderous violence, but at its core is war. Now, the same dynamic is emerging in Iraq.

The Latin American women’s movement has given this crisis a name: femicide. It is defined by various forms of gender-based violence against women, including murder, and characterized by impunity for perpetrators and a lack of justice processes for victims. It occurs in conditions of social upheaval, armed conflict, violence between powerful rival gangs and militias, rapid economic transformation and the demise of traditional forms of state law enforcement.

For Guatemalan women, particularly those who are young, poor or Indigenous, the war against them continues — and Rosemary is one of its victims.

Young women in Rosemary’s community of Barcenas have few options other than backbreaking work in themaquilas (sweatshops) for meager pay. After long shifts, they walk home at night, looking over their shoulders for the attack they know could come at any moment…..

In Iraq, the U.S. invasion in 2003 also triggered a surge in violence against women. The overthrow of the Ba’ath regime ended decades of nominally secular rule, in which women consolidated certain human rights gains. The U.S. occupation brought to power Islamists whose vision of the world hinged on a fundamentalist policing of social roles for women.

In Guatemala, a grassroots organization called the Women Workers’ Committee has created an oasis of safety for women and girls. They organize workshops and community watch groups to help

women know their rights to life, health and decent work and to enhance their safety. They provide crucial counseling for traumatized women and girls and legal services for families of murdered women. Guatemalan women have learned a bitter lesson. The crucible of war allowed violence against women to become entrenched in communities. Femicide has become the “new normal,” something women must think about every day.

“School of the Americas Watch is where I first came across the involvement of the Zetas with the cartels. Then I saw a website by Mothers of the murdered young women of Juarez accusing the Zetas of being involved in the torture killings of their daughters. The saddest part of all is that Guatemalan Kaibiles, notorious death squads trained by US Special Forces and known for disemboweling pregnant Mayan women in Guatemala and Chiapas at Acteal, also have been working for the cartels as many of them mutinied as well for more money. “Both Zetas and Kaibiles have been hired as mercenaries in Iraq. Kaibiles were even hired as UN Peacekeepers in the Congo! So called Peacekeepers have been killing and raping in Haiti, the Congo and Bosnia.” There is more information:
http://www.militaryphotos.net/forums/showthread.php?t=77215