Condemnation of 2 to 13 years in prison for young people from Altsasu for injuries, public disorder and threats. 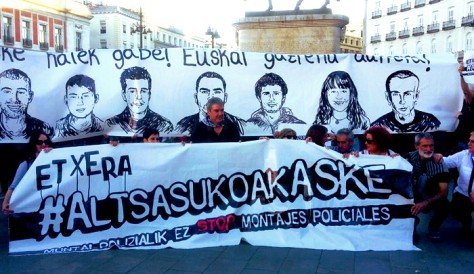 partly from a report by  @AhotsaInfo

The families of the Altsasu victims held a press conference to denounce the Spanish injustice and call for mobilisations.

The Spanish National Court has condemned the 8 youngsters of Altsasu arrested after a bar brawl with two police and their partners, though they finally had to drop the ridiculous  “terrorism” accusation. The Court is seen to be a tool of the far right and condemned by Amnesty International after a series of blatantly repressive false judgements.

Three of the young people arrested after a bar brawl with the two drunken Spanish paramilitary Guardia Civil police, spent a year and a half already in preventive detention and now face 12 years more . They were accused of Terrorism and the police and state sponsored Victims of Terrorism (COVITE) demanded up to 62 yrs jail.

Photos of the accused filled the Spanish media, while the notorious ‘manada’ rapists (above) had their identities protected.

The only proof of terrorism was the accusation of attending a rally by Ospa Eguna, a movement demanding the withdrawal of occupation forces from Euskadi. This could not be proven and Ospa Eguna was only set up AFTER the Basque guerillas ETA had unilaterally disbanded.

The Altsasu sentences are appallingly unjust. I will continue informing people here in the UK of the rotten Spanish Justice system and continue campaigning for their release, along with the Catalan political prisoners.

The incident took place at five o’clock in the morning, during the local Altsasu festival.

The case has divided Spain with the rabid far right media glorying in slandering and vilifying the accused and publishing their photos.

One of the off duty military cops, a Lieutenant suffered multiple blows and kicks and fell to the ground with an ankle injury. Yet, in one of many irregularities, a mobile video made by Iñaki Abad who has already spent 560 days in jail shows him running about after the incident.

He is seen wearing a spotless white T shirt despite witnesses swearing he was covered with boot marks. His girlfriend declared they feared for their lives.

Three of these young people were held in prison in a first-degree regime under the especially repressive FIES isolation and torture regulations. 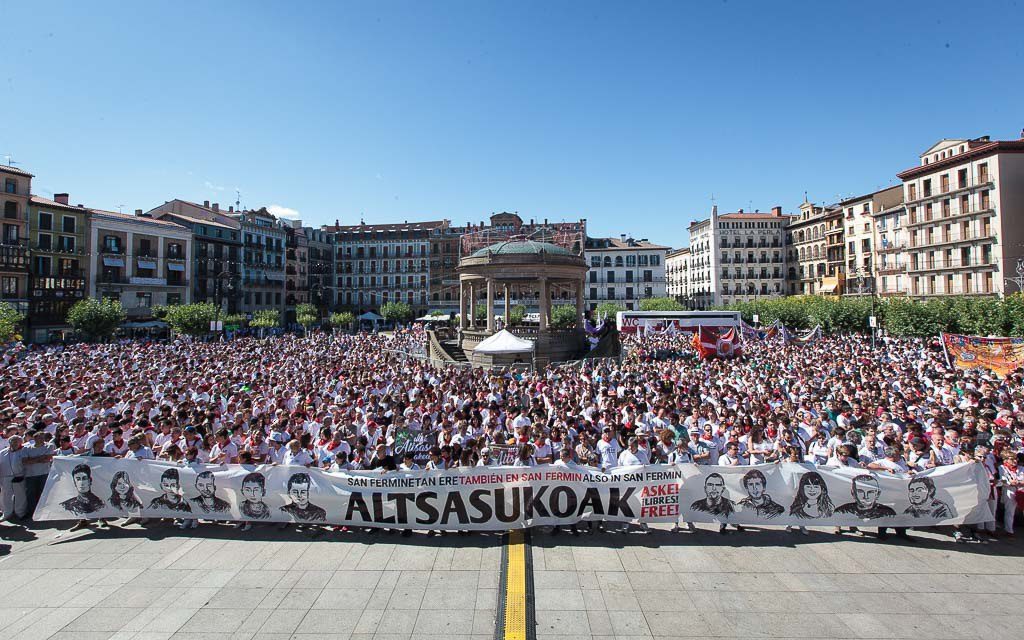 Witness testimonies have been denied, recorded videos and audition tests of radio interviews , in which the complainant right wing police offer contradictory details, have not been admitted as evidence.

The declaration of many of the witnesses proposed by the defenses were not admitted, and yet all the witnesses of the accusations have been admitted.

The penalties range between 2 and 13 years in prison for crimes of attack against agents of the authority, injuries, public disorders and threats, according to Spanish media

The Court dropped the accusations of “terrorist offenses”, considering that “the terrorist purpose” of the action has not been proven, nor the linking of the accused to “terrorist organization.”

The Court has applied the aggravations of “abuse of superiority and hatred” and because “they were committed for ideological reasons and of animosity to the Civil Guard.”

From toward the end of dictator Francisco Franco’s time in power until a decade after the transition to democracy, the Basque Country had its own “dirty war” when shadowy paramilitary and far-right groups, acting with the blessing or tolerance of the government in Madrid, killed dozens of people suspected of links with ETA — 73, according to one Basque government report. Other research has compiled 4,000 credible accounts of torture in police custody from 1960 to 2013, most of which went unpunished, resulting in repeated condemnations of Spain from advocacy groups and the European Court of Human Rights.

One thought on “Basque Country: 8 youths Jailed up to 13 yrs for Bar Brawl with off duty Spanish Paramilitaries”