Condemnation of 2 to 13 years in prison for young people from Altsasu for injuries, public disorder and threats.

partly from a report by  @AhotsaInfo

The families of the Altsasu victims held a press conference to denounce the Spanish injustice and call for mobilisations.

The Spanish National Court has condemned the 8 youngsters of Altsasu arrested after a bar brawl with two police and their partners, though they finally had to drop the ridiculous  “terrorism” accusation. The Court is seen to be a tool of the far right and condemned by Amnesty International after a series of blatantly repressive false judgements. END_OF_DOCUMENT_TOKEN_TO_BE_REPLACED 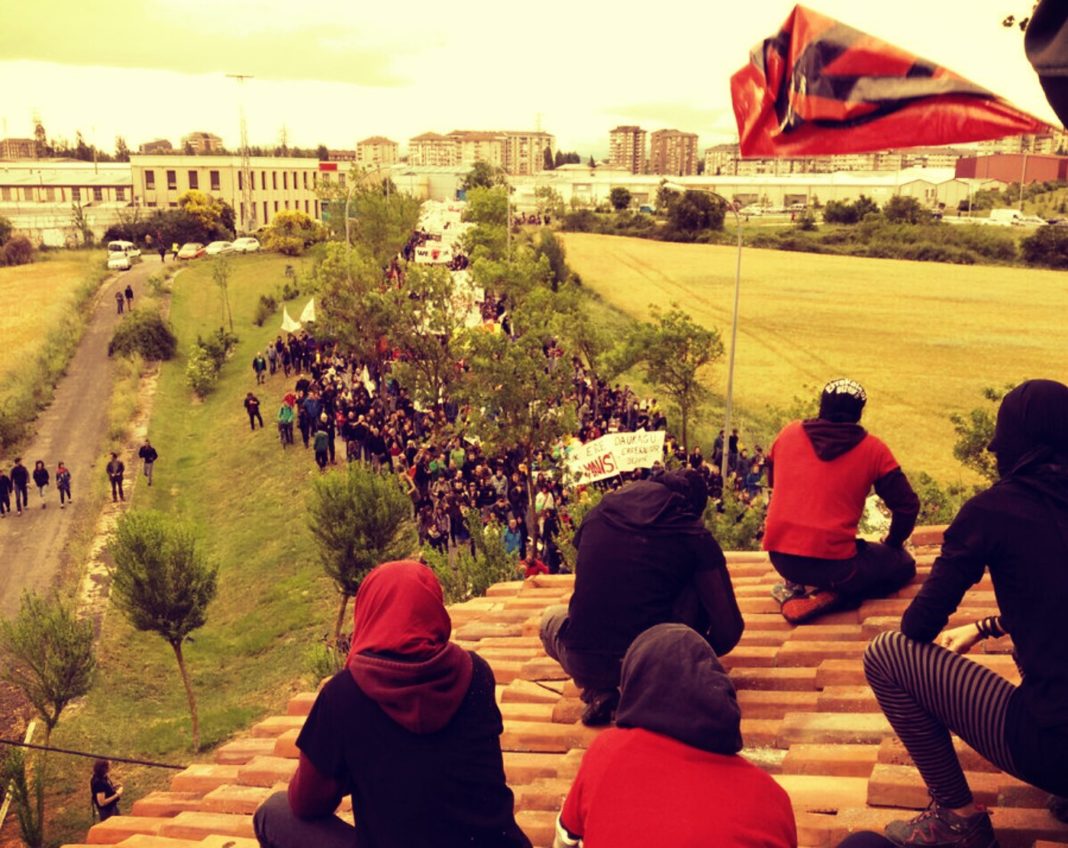 The largest squat and self-managed district in the Spanish state is in Gasteiz and is called Errekaleor and has at least 150 inhabitants. At the moment it is besieged by the Ertzaintza, the Basque police forces in the service of speculation and the Spanish State .

Over 10,000 people came out to defend the occupied anti-capitalist neighbourhood on June 3rd. Dozens were injured or arrested by riot police who dug up the street to cut electricity cables to the barrio.

The mayor of Vitoria, Gorka Urtaran, has promised that he will destroy the amazing revolutionary Errekaleor project and evict  the occupiers, including many children and a 3 month old baby, whom the PNV politician defined as “anti-system”

By   Anonymous Contributor    ..   Errekaleor Bizirik is an occupied neighborhood at the edge of Vitoria-Gasteiz, Araba, in Euskal Herria (Basque Country). We are a project based on the principles of ‘autogestion’ (self-management or autonomy), consensus based decision making, feminism, anti-capitalism, and Basque cultural reinvigoration.

We are the biggest occupied space on the Iberian Peninsula, with over 25 acres of land and 150 inhabitants. Among us are children, elderly residents, blue-collar workers, the unemployed, students, teachers, and a variety of local wildlife. Our project includes a 5-acre organic farm, a bakery, a bar, a social center, an old church turned music venue, a library, a theater, a free shop, a recording studio, a publishing house, and a school with language classes. END_OF_DOCUMENT_TOKEN_TO_BE_REPLACED

Protests for freedom of the 2 rescuers.–Freedom for Bego and Mikel-  –No person is Illegal–.

from Diagonal and TeleSur..  translation by The Free

The activists and eight refugees have been detained in Greece when they tried to access a ferry bound for Italy in an action of civil disobedience to European migratory policies organized and financed by social groups.

Until now only a handful of refugees have made it to Spain due to government blocking.

Mikel Zuloaga and Begoña Huarte were seized by Greek police in the port of Igoumenitsa (Greece), when they were attempting to smuggle eight refugees from there to Euskadi, hidden in a camper van.. END_OF_DOCUMENT_TOKEN_TO_BE_REPLACED

..In another  outrageous ruling he Spanish Supreme Court has ratified the closure and seizure of 107 herriko  (village) taverns in Euskadi (Basque Country). The pubs were accused of secretly supporting the Basque resistance 14 years ago. Although ETA has unilaterally ceased fire and disbanded since 2006 the repression by the Spanish State continues against any person or group  accused of giving even verbal support to Basque Nationalism, with no political  amnesty, continuing isolation of prisoners, torture and new arrests. If the Courts actually carry out the seizure it may provoke a new uprising in Euskadi. e#HerrikoakLibre