The 12th Dublin Anarchist Bookfair takes place on the 15th September 2018 at the Teachers Club 35 Parnell square and on the evening ofthe 14th at Wynns hotel.

Every year hundreds of people attend the Dublin Anarchist Bookfair for a day of inspiring discussions and the opportunity of meeting lots of other radicals, browsing books and meeting campaigns.

With few days to go we are finalising the details. END_OF_DOCUMENT_TOKEN_TO_BE_REPLACED Below is a list of posts on thefreeonline which were cited by The Turkish prosecutors as evidence that the site should be banned. see  list of more banned sites further below. END_OF_DOCUMENT_TOKEN_TO_BE_REPLACED

The republican project materialized in a period of eight years and that culminated in the end imposed by the uprising of the military and the victory of the national side. The years of dictatorship ended up burying the republican experience, which was then a silent memory. END_OF_DOCUMENT_TOKEN_TO_BE_REPLACED

31st July 2018  We just checked and the No Platform for Fascism Tool Kit, seems to be unavailable on Firefox , at least here in Spain. Doesn’t appear on search.

But it may still exist for those who already have it installed, we relaunched Firefox and lost it.

On Chrome you can still install it with this link..Chrome. but it also doesnt appear in the search list.

by  Arvind Dilawar      YouTube has long been acknowledged as, well, not exactly the friendliest place on the Internet. But as the far right has ascended in the wake of Donald Trump’s election, many critics have accused the video-sharing website of being much worse than a playground for trolls; they believe that YouTube is an avenue for radicalization and recruitment.

Following complaints that the site’s search algorithm was only thinly veiling caches of hateful propaganda, YouTube decided to exclude some users from monetizing their content. But while the site is no longer paying extremists, it is still very much hosting them.

The Metropolitan Anarchist Coordinating Council, an organization facilitating collaboration between New York City-based anarchists, believes that the far right must be fought on every front.

Accordingly, MACC recently released the No Platform for Fascism Tool Kit, a browser plug-in for both Chrome and Firefox, which each week serves users videos from neo-Nazi, white supremacist, and ethno-nationalist individuals and organizations to report.

MACC’s hope is that, through collective action, anti-fascists will be able to drive bigots from YouTube, effectively staunching their recruitment efforts. END_OF_DOCUMENT_TOKEN_TO_BE_REPLACED

The walls of the Almudena cemetery in Madrid were used as a backdrop for mass illegal executions of suspected opponents by the victorious  fascist rebels.

The coverup of hundreds of thousands of murders, stealing of babies and 40 years of State terror by the right wing inheritors of power and privilege continues today. In this case the popular left city council of Madrid has defied the State to publish the names of victims.

Aug. 5 marks  the shooting of the 13 Roses, young women who were convicted of supporting the bombing death of General Isaac Gabaldon in July 29, 1939. The case also included two other women, Antonia Torres and Julia Vellisca, and another 53 men, all shot against the walls of the cemetery in Madrid.

Madrid City Council has rescued from oblivion the names and details of almost 3,000 people murdered by the victorious fascist catholics during the postwar Franco dictatorship in pSain.

This is the largest documentary work done in Madrid on those executed in the postwar period, since the aforementioned list reviews the number of 2,663 executed and executed in Madrid by the historians Mirta Núñez and Antonio Rojas in about three hundred people. END_OF_DOCUMENT_TOKEN_TO_BE_REPLACED

The Turkish invading forces in Efrin, Syria, is acting with impunity in the face of the surprising incapacity of the Syrian government and the complicity of the US and Russia. According to the invaders, 712 Kurds of the Yekîneyên Parastinê Gel (Popular Defense Units, YPG) have died. It is estimated that the self-defense militia consists of 8,000 Volunteers in Efrîn.

Only yesterday, according to Ankara, his terrorist attacks killed 63 people. The Syrian Observatory for Human Rights (SOHR) reduces the number to 85 murders by the Erdogan hordes. He has not reported Turkish casualties. END_OF_DOCUMENT_TOKEN_TO_BE_REPLACED

On August 12, a fascist murdered one person and injured dozens more by driving a vehicle into a crowd of anti-racist protesters in Charlottesville, Virginia. Fascists had been calling for violence in advance; they made it very clear that this would happen.

We are calling for solidarity actions to take place around the country in response—to support the bereaved, to encourage those who courageously stood up to fascist murderers, to reach out to our communities about this situation, and to show that we will not stand for this. Here, you can find a list of solidarity demonstrations and a PDF of a flier you can print and distribute to inform others about this situation. 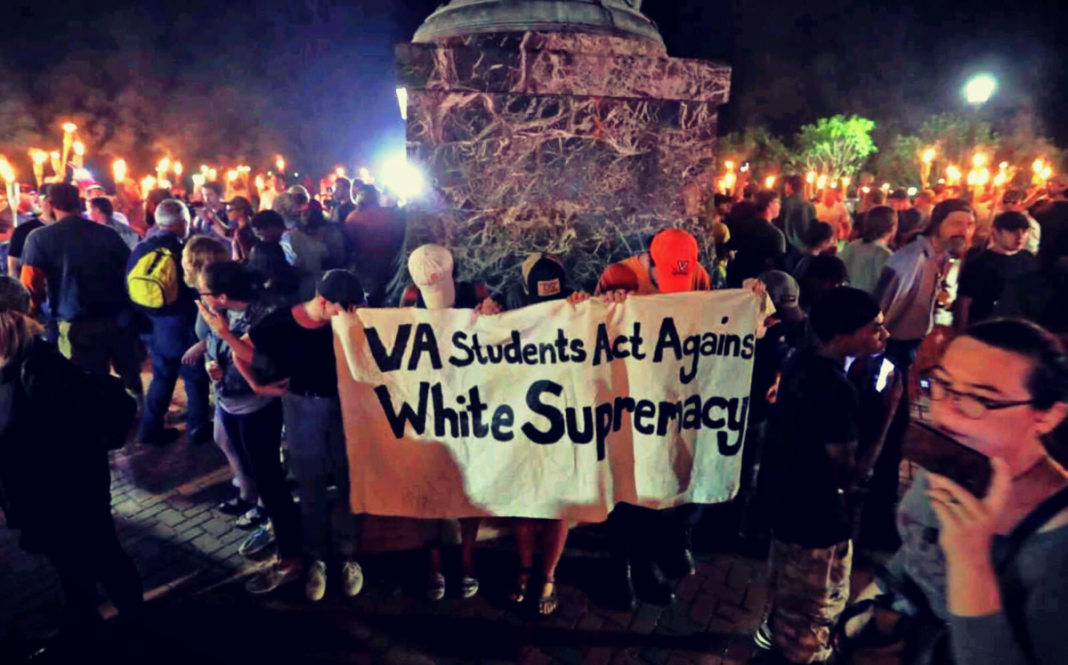 To add your event, email: info[at] itsgoingdown [dot] org and send updates about solidarity demonstrations to us via @crimethinc or rollingthunder@crimethinc.com. END_OF_DOCUMENT_TOKEN_TO_BE_REPLACED

by Squat!net, shared with thanks!        This Thursday 3rd of August, 2017, in the morning, the cops have broken the doors of several rented and squatted houses in Florence, Rome and Lecce, to arrest eight anarchist comrades from Florence.

La Repubblica (Italian mainstream newspaper) says it’s the result of an investigation made by the DIGOS (Division of General Investigations and Special Operations) and the antiterrorist Italian police, regarding two events.

First, an explosive device was put in front of a fascist bookshop linked to Casapound during last New Year’s Eve, and the police bomb-disposal expert lost a hand and an eye.

Second, a Molotov cocktail was thrown against a Carabinieri barracks in Rovezzano (Florence) on 21st of April, 2017.

The cops say they have identified people via bugging telephones, tailings and samplings of biological material (DNA). END_OF_DOCUMENT_TOKEN_TO_BE_REPLACED