Two people have been blinded this week in violent reprisals from State and local ANC-linked thugs as they try to push land occupiers out of Cato Manor in Durban, South Africa. Pic: AbM

The relatively new occupation, organised with shackdwellers’ movement Abahlali baseMjondolo (AbM), has been shaken by the extreme violence, which saw Smiso Maphumulo shot in the eye on Tuesday and Noluthando Masikiza blinded on Thursday. In a statement, AbM said:

Their ‘crime’ is that they have been impoverished by a system of oppression and have occupied land in order to have a place to live. The government of this country has no regard for the poor. It treats our legitimate and urgent aspirations for justice as criminal and rules us with violence.

The municipality has been interdicted by the High Court in Durban to refrain from demolishing, destroying and burning people’s property in seven land occupations, including the new land occupation in Cato Manor. 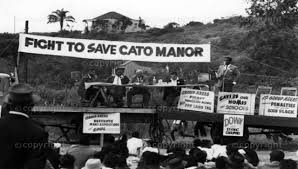 The court interdict further states that people whose homes were demolished are allowed to reconstruct. But because the ANC in the Province considers itself as law unto themselves they have continued with the evictions in violation of the court interdict.

Yesterday the Anti-Land Invasion Unit continued to demolish people’s homes. When the shacks were destroyed the materials were burnt. This was an unlawful and violent attack undertaken by a criminal state.

In Women’s Month the government of the ANC keeps emphasising their role in the fight for the rights of women. We ask which women are these when armed agents of the state can shoot at women who are poor and living under shameful conditions?

The situation in Cato Manor is getting out of hand because the ANC does not want to respect the processes of the law and because it holds impoverished black people in such contempt that it does not recognise our humanity. END_OF_DOCUMENT_TOKEN_TO_BE_REPLACED

By Kaos. Madrid  There is a suicide every two days in Madrid due to mass evictions and lack of work, according to the Mortgage Affected Platform (PAH) which has produced a report with official data from the Police. They demand more involvement from mayor Carmena to stop the evictions.

Every five hours there is a suicide in Spain because of the economic crisis that plagues hundreds of thousands of families. In the Community of Madrid one  is estimated to occur every 54 hours, with evictions being a main focus.

These figures are more than dramatic data. The poor economic situation of hundreds of thousands of families in Spain, provokes in many occasions the loss of hope of the citizens.

According to a report of the Platform of Mortgage Affected (PAH), which has had access to the Digital Confidential, there are about 34 suicides occur every week in the country. Occupying the Community of Madrid a mean of a suicide every 54 hours, which means three a week. END_OF_DOCUMENT_TOKEN_TO_BE_REPLACED

Beginning in Dec 2008 the first Rimaia was occupied in central Barcelona at the height of the student uprising against the Bologna process of elitism and  privatising of Universities.

After a violent eviction the ‘okupas’ took over a huge building in the main Gran Via and declared the Free University with dozens of free courses and workshops. it had a library, an art workshop, a cooperative and multiple classes (philosophy, computer networks, Languages…).

After another shocking illegal surprise eviction the Rimaia Free Uni grabbed an abandoned building in the Sant Antoni barrio where the project has put down community roots.Pablo Molano, center> his life and death were the inspiration of the latest New Rimaia

Inside the Free University you could live the revolution in miniature, all is decided in open assembly and almost always unanimously, with up to 70 people, 30 living there and 40 with projects. Living freely with huge enthusiasm and creativity. END_OF_DOCUMENT_TOKEN_TO_BE_REPLACED

summarized translation  en catalá abaix.    “Those who have known and lived with El Lokal, see it as a beacon for social movements in the city, a center of constant social and political unrest; a space for training, debate, organization and  coordination of local and international  struggles. Always ready, always on the ball.

Last Sunday we celebrated its 30th birthday at the adjacent  ‘Agora Juan Andrés Benítez’ occupied space, which is named in  memory of a neighbor killed by the Mossos local police in 2013- with a debate that brought together some of the anarchist and autonomous struggles of today. END_OF_DOCUMENT_TOKEN_TO_BE_REPLACED

http://ellokal.org/   In short,  organized real estate violence, which is not new but has been getting much more serious for two years. We have seen investors buy whole buildings and send thugs with “offers” to tenants to leave, we have seen properties vacated in record time, we have seen the proliferation of ‘Desokupa style companies’ (companies which provide heavies to evict people) specialized in bullying and intimidation, and companies cashing in on  alarms, armored doors, video surveillance, doing an  kind of business with the expulsion of families. END_OF_DOCUMENT_TOKEN_TO_BE_REPLACED

In February Episode 1 of LIBRES (The Free) came out, free on the web.

It’s an eagerly awaited weekly 15 min adventure of Iberian squatters who get evicted and occupy an abandoned village in the mountains.

Starring some friends who’ve done it in real life.

Libres is sub titled in English and provides a brilliant insight into current Revolutionary politics in Spain. It’s funded by ‘Crowdfunding’. If you like it please re-post to didtribute.    Nuff said.. Enjoy.

this is the Trailer… creative commons

Dear people,….  After Bankia’s refusal to negotiate, the campers took action. At one o’ clock in the afternoon they occupied the Bankia franchise in Alcalà 1, at the corner of Puerta del Sol.

Police went in after them and sealed off the entrance against sympathisers and press who assembled outside.

The occupiers demanded an end to the evictions, and the right to for those at risk of eviction to stay in their houses, paying a social rent. END_OF_DOCUMENT_TOKEN_TO_BE_REPLACED

New record of evictions in 2012: 532 per day.Shame!
According to data released Tuesday by the General Council of the Judiciary, in the second quarter of 2012 continued to increase evictions in the Spanish state, from 517 a day in the first quarter, to 532 per day in the second quarter.
In just six months, and there have been 94,502 foreclosures.
While the government insists on rescuing banks and cutting billions from schools and hospitals to be gobbled up by the ever growing debt and interest rates, rather than responding to citizen demands requiring the recovery of thousands of homes illegally accumulated in the hands of financial institutions .
We demand the retroactive payment in the immediate moratorium on evictions and social rent for hundreds of thousands of empty flats in the hands of banks.
Citizen Rescue Pla, NOW