Here we translate one of many posts confronting ingrained patriarchy/  in Spanish society,  published since the first ever hugely successful Women’s Work and Home General Strike in the Spanish State on 8th March 2018, and also relating to the outrage at the release of a group of gang rapists.. the ‘Manada’, and the various waves of feminist social revolution now sweeping the world.

The Herd of the Male Murderer

‘In the law courts men are not usually framed in the profile of the abuser .. while women are often presumed to be liars. Women report abuse and lawsuits are filed, but without being investigated. The presumption of innocence is distorted and the legal guarantee is transformed into defenselessness.

Women have recently been conquering levels of equality and freedom (in Spain), but many men are watching us, skulking,  full of resentment, and eager to put us back in the place they think is ours’.

So affirms Amelia Valcárcel: ‘ this contained anger usually exerts itself  through subtle forms of violence, such as verbal, in the media, in relationships with us or when they are away from women in their professional, leisure or social environment’.

‘No More Patriarchal Violence’ .. ‘Abusing one of us they abuse us all’ .. ‘We cry out against our forced destiny’..

Although repressed, the patriarchal law is a hidden code that permeates every pore of our society. The threat of unleashed anger and exemplary punishment is always present.

When one of the members of the ‘herd’ commits a heinous crime the other members of the fraternity come out like vermin in their defense by invoking patriarchal norms.

In Castellón, Spain, a man killed  his two daughters of 4 and 6 years old with a knife to take revenge on his ex-wife. The woman had asked for protection from the Law, but justice did not trust her.

She had requested protective measures in court, but the judge considered that the risk was low and dismissed the measures, noting that both parents were involved in a custody suit and that there were contradictions between the testimony of the man and the woman. .

Today her daughters are dead, the cries of horror of the mother were heard throughout the neighborhood. END_OF_DOCUMENT_TOKEN_TO_BE_REPLACED

At least forty women were killed while thirty-two children were subjected to sexual abuse in October 2017, a report by We Will Stop Femicide Platform says. 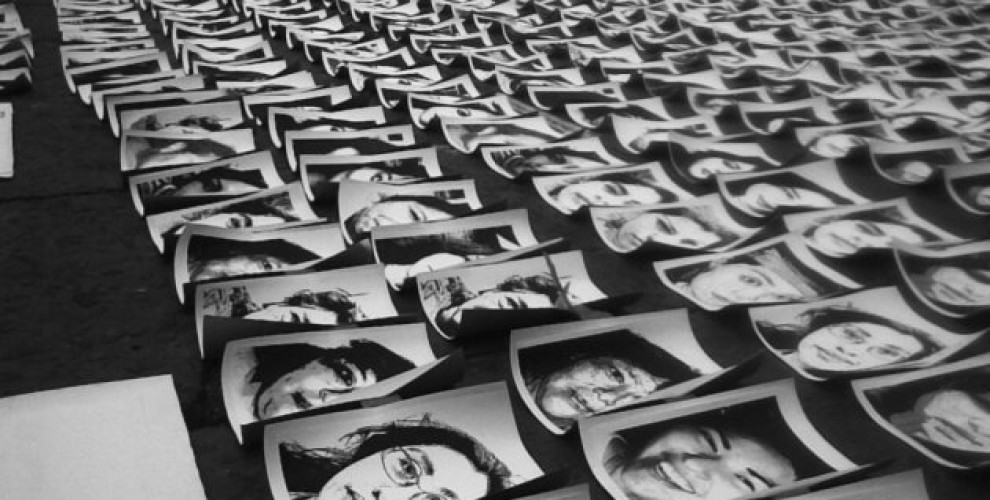 According to the new report, forty women were killed in Turkey on October 2017 alone. As of October, the total number of the victims of gender-motivated murders raised to 339 for the year 2017. In 2016, 328 women were killed over the same period.

Twenty-eight women were killed at their homes, mostly by their male partners or family members. Three women were from Syria and one was German.

Istanbul is leading the gender-related violence tables in all categories while Antalya, Aydın, Adana, Antep, Tekirdag, Manisa and Yozgat follows.

END_OF_DOCUMENT_TOKEN_TO_BE_REPLACED

Despite dozens of support demos juana was forced to finally come out of hiding and hand over her children to her abusive ex partner, and still faces probable prison for defying the courts. The children, aged three and 11, were forcibly handed to their father, Francesco Arcuri, of Italian nationality who was sentenced in 2009 for mistreating the mother of the children.

By Natalio Blanco,  translated from Kaos en la Red.. (updated) with thanks

Italy, the European Union country in which the Spanish justice wants Juana Rivas’ two youngest children to be recalled, has been condemned this past March by the European Court of Human Rights for its inefficiency in the fight against the sexist scourge.

Italy has frightening statistics on everything related to gender violence, even more lacerating than the data that have been registered in Spain successively year after year despite the recent state pact signed in parliament by the main political groups.

The children, aged three and 11, were forcibly handed to their father, Francesco Arcuri, of Italian nationality who was sentenced in 2009 for mistreating the mother of the children.

This judge has not taken into account at any time that the children of a victim of gender violence, with which her father was convicted in 2009 by the head of the Criminal Court 2 of Granada, María Luisa Roldán, should also be considered victims.

Arcuri acknowledged before the judge that on the morning of May 7, 2009 he repeatedly “hit” his partner at the home they shared with his three minor children in the capital of Granada after asking him to explain where he had been that night. Juana Rivas needed medical assistance for the blows received.

Rate of Italian Femicides TRIPLES even that of Spain.

The head of the Court of Instruction number 2 of Granada made the decision contrary to what was dictated only two days before by another judge to Juana Rivas in Granada, after reappearing after almost a month of being in hiding with her children. END_OF_DOCUMENT_TOKEN_TO_BE_REPLACED

By It’s Going Down         On the night of Wednesday May 3, Lesvy Berlín Rivera Osorio was strangled to death with a telephone cord on the campus of the National Autonomous University of Mexico (UNAM) in Mexico City. 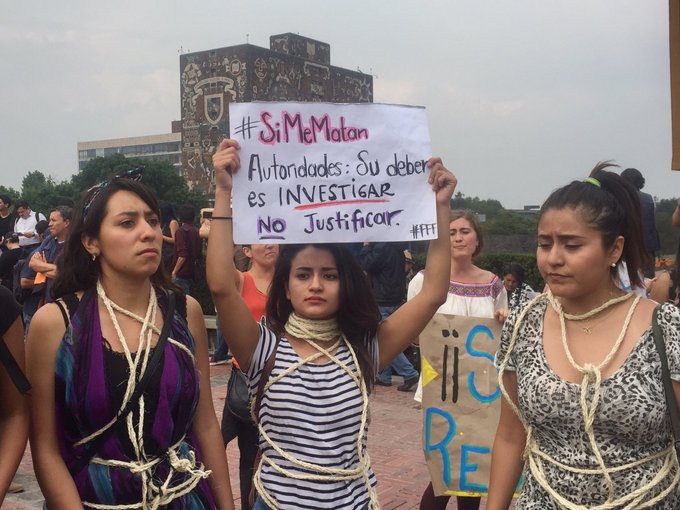 Her body was discovered hanging from the cord of a telephone booth near the Engineering Department by campus security at around 7 a.m… 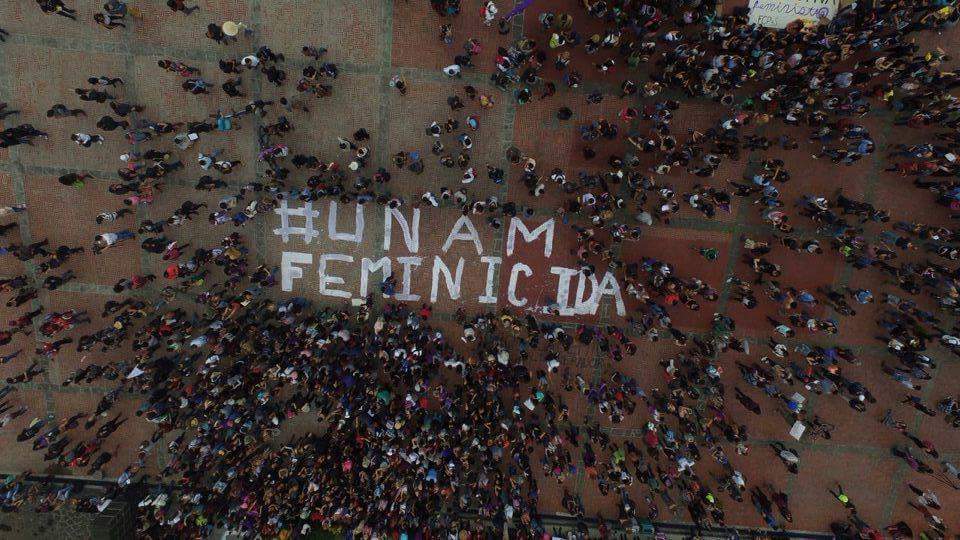 The Twitter account of Mexico City’s Public Prosecutor’s Office (PGJDF) – the authorities that will be investigating her murder – did not tweet out any solid evidence or possible motives for the murder.

However, they did put out tweets suggesting her lifestyle was the cause of her own death, implying that her romantic relationships, alleged drinking, and her decision to live with her boyfriend, all made her a person with questionable morals. .. SEE PGJ BELOW END_OF_DOCUMENT_TOKEN_TO_BE_REPLACED

Berta Caceres’ murder and its perpetrators’ non-penalization is not an isolated case, but one among numerous environmental activists across the world whose murders go unpunished. Picture credit: http://www.tercerainformacion.es/antigua/spip.php?article99997

March 8 is World Women Day, but today (March 3) there’s another good reason to reflect on the role of women in society, write CAMILLA ROLANDO MAZZUCA & BROTOTI ROY. On this day last year the awarded environmental activist Berta Caceres was killed

Lack of governmental investigation, police or military complicity and increasing criminalization of social protest are some of the numerous common features of today’s environmental justice conflicts from all over the world. END_OF_DOCUMENT_TOKEN_TO_BE_REPLACED

‘Las Morras’ use video and social media to fight back against misogyny in Mexican society.

The group have received death threats for the video which has had 1,298.797 views on YouTube

Armed with skirts, social media, and a hidden camera, a group of women have taken to the streets of Mexico City to expose the misogyny inherent in Mexican society. ‘Las Morras’ (the young women) say Mexico’s macho culture is making life unbearable for women across the country.

Earlier this year in May, four young Mexican women ventured through the streets of Mexico City with a hidden camera, determined to film the misogyny that women are forced to deal with every day.

The insults caught on tape – from “Whores!”, to “Hey, dolls!” – come thick and fast. Six months later, the footage is still being shared on social media networks, and has even become a regular feature at feminist conferences. END_OF_DOCUMENT_TOKEN_TO_BE_REPLACED

Bullfighting is the cultural heritage of the Conquest, in Spain it represents the exaltation of torture and legitimation of authoritarian male abuse and violence. END_OF_DOCUMENT_TOKEN_TO_BE_REPLACED

Rape by prison officers and the Fascist Party of women involved in politics or only for being relatives of men thought to be opponents of the regime; torture of political prisoners with a gender component, insults and blows (in the genital and reproductive areas); massive baby theft; hair shaving, forced poisoning  […]

These are the main methods by which the western tolerated facist regime  specifically repressed women during the war and 40 year long dictatorship in Spain. A complaint on behalf of 6 victims has been filed with the court run by Argentine judge Maria Servini, head of the mega-court case launched in 2010 against the crimes of Francoism through the principle of universal justice.

The platform Women’s Link Worldwide, is responsible for the complaint and has gathered the testimonies of the six women:…

END_OF_DOCUMENT_TOKEN_TO_BE_REPLACED

en español abajo. We took to the streets to denounce the insecurity faced by women, the violence to which we are subjected to and to claim the right to decide whether or not to become mothers. We made music with joy, dressed up and paraded, accompanied by a Rebellious Pussy through the streets of Seville on May 1st, 2014, as a metaphor of what we DON’T want to be: submissive trapped women .

Last Thursday, three of these demonstrators were cited as defendants to testify after a complaint lodged by the Spanish Association of Christian Lawyers  who see the procession carrying the Rebel Pussy as a crime against their religious beliefs and a crime of incitement to discrimination, hatred and violence for reasons related to religion or belief, with a prison sentence of between one and four years and a fine . END_OF_DOCUMENT_TOKEN_TO_BE_REPLACED