Today this city reawakens its antifascista memory, stronger than ever, sending another statue to its place: the dustbin of history!

Twitter hosted a lot of laughs on Friday on account of the beheading, painting, smashing, overturning and trashing of the mass murdering dictator Francisco Franco. Anti fascists, gays and feminists competed to attack the statue day and night.

The controversial statue, which was erected as part of an ‘exhibition’ the Born cultural center in the city of Barcelona was retired last night by the rubbish department. , Daubed with of red paint, yellow and white, rotten eggs, with Catalan nationalist stickers and the LGBT flags rainbow flag, with ‘dedications’ scrawled on the hindquarters of the horse.

[Youtube https://www.youtube.com/watch?v=Bho8Q6H2DRA?rel=0%5D
The twitter storm goes under Under the label of social network #samataopaco (they killed Franky!)

END_OF_DOCUMENT_TOKEN_TO_BE_REPLACED

José moved to prison hospital in Terrassa which is run by his accuser and enemy, ex boss of Quatre Camins Prison. He can’t walk and seems to be dying, but is lucid and resisting.Demonstrations in Barcelona today.https://directa.cat/actualitat/empitjora-lestat-de-salut-de-jose-antunez-becerra-traslladen-lhospital-penitenciari-de

The coming days will be crucial in the fight for the life and freedom of José Antúnez  ..Solidarity outside the walls will be felt more strongly. Because José is not alone …

END_OF_DOCUMENT_TOKEN_TO_BE_REPLACED 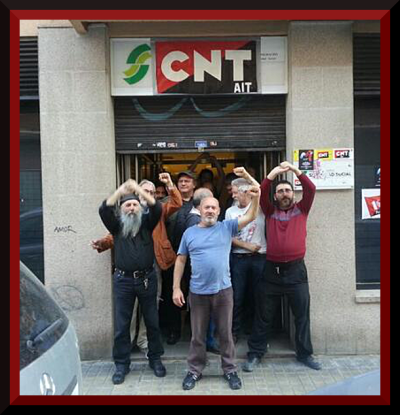 EVICTION FROM THEIR OWN HISTORICAL PROPERTY

by F. M. H. (en Castellano abajo)    Eleven members and supporters of the CNT went on trial in  the Criminal Court No. 4 of Zaragoza for squatting the old Hospice of San Jorge, in Padre Manjon Street, Zaragoza ,Delicias District from which they were evicted in February 2013 by the Police.

The Ministry of Labour, the property owner, asked for fines of 1,440 euros each for usurpation, while the prosecution – that dropped charges against two of them when a police officer admitted they were not inside the building – asked  for 900 euros each.. END_OF_DOCUMENT_TOKEN_TO_BE_REPLACED

The Beatification Ceremony comes at a historic moment. For the first time an Interpol warrant has been issued for 2 notorious fascist criminals of the Franco regime, and the United Nations has called for an investigation into the thousands of ‘disappearances’ under ther dictatorship.

When right wing sections of the Spanish military tried to take power from the Republican Government the Catholic Hierarchy came out in their favour even signing a public Pastoral Declaration supporting them which may have swung the war in their favour. 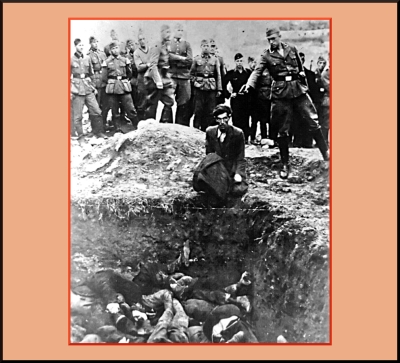 The support of the all powerful Church helped turn a failed army mutiny into a Crusade against the popular desire for abolishing oppression, portrayed as the evils of anarchism and communism. This resulted in a giant horror, with over 500,000 deaths on all sides and 40 years of fascist/catholic dictatorship, plus the execution of 100,000 republican prisoners, the robbery of 200,000 babies, etc, etc END_OF_DOCUMENT_TOKEN_TO_BE_REPLACED

Update: Since the Catalans joined hands in a 400km demo for Independencethe fascist reaction has been predictable, with all sorts of politicians and military men making outrageous, illegal, racist invitations to violence against Catalans which are plastered all over the Spanish media

If Spain and Catalonia were playing a real rather than figurative game of Russian Roulette, the revolver would now be loaded with at least two or three bullets. On Tuesday night, an extra one was slipped into a chamber when the Principe de Asturias prize-winning economist Juan Valerde announced that Madrid may have to “bomb Barcelona” in order to put a halt to the region’s rising separatist aspirations. END_OF_DOCUMENT_TOKEN_TO_BE_REPLACED

Rajoy’s Government of Scoundrels Stokes Nationalist Tensions For Own Gain

Since taking office in November 2011, Mariano Rajoy’s government has done pretty much everything it can to alienate the Spanish public. Even before completing its maiden year in office, it had broken almost all of its key election pledges. Taxes would not be hiked, it had promised, but they soon were. Banks would never be bailed out with public funds, public spending on vital services would not be cut, unemployment would be a priority, the economy would improve, public hospitals would be safe in their hands… all turned out to be lies. END_OF_DOCUMENT_TOKEN_TO_BE_REPLACED

The planned removal of a monument in Madrid to the anti-fascist International Brigades is an attempt to lock down discussion .   David Mathieson

‘In November 1936 the university campus became a key theatre of the war. As Franco tried to take Madrid his troops were resisted there in some of the bloodiest fighting of the conflict.’ END_OF_DOCUMENT_TOKEN_TO_BE_REPLACED

First lesbian who seeks redress for the Spanish fascist repression is still persecuted for being gay, thereforeshe is known only as M.C.D.

Prosecution: “I declare that M. C. D. is a homosexual and a rebel to her family ”
The first lesbian who seeks compensation after being jailed and punished by the Spanish State was sentenced without her counsel making any defense.

M.C.D. feels that she has almost a moral duty to address the media. But she does reluctantly and with limitations: neither her name nor place of residence must be made public.

That process is still not finished, in which a 16 year old girl was arrested, paroled, and a year later as she had ‘not reformed’ judged and convicted at the age of 17  with being a lesbian…. END_OF_DOCUMENT_TOKEN_TO_BE_REPLACED